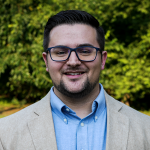 May is a relatively unassuming month. Though we are still in the holy season of Easter, we have celebrated the day itself and await the great day of Pentecost. Between these two important days, however, there is much to celebrate. In fact, there is so much going on in May from the perspective of the Church’s liturgical calendar that it cannot be exhausted here. There are different ways one could divide up and categorize the memorials and feasts, but I will consider Doctors, Apostles, Mary, and Jesus. Even categorizing things this way, there is a richness that cannot be adequately expressed, a depth that cannot be sufficiently plumbed. For this reason, I will focus in a special way on the Ascension of the Lord, a solemnity not infrequently overshadowed by the aforementioned solemnities of Easter and Pentecost.

Perhaps the title “Doctor of the Church” is new to you, or perhaps you’ve never quite understood what it means. The persons afforded this lofty title are not medical professionals, of course, but doctors in the classical sense, namely teachers. In brief, the Doctors of the Church are saintly men and woman who have significantly contributed to our understanding of the mysteries of faith. Through their teaching, they provide sure guidance to the faithful of every age and nation. There are, to my knowledge, thirty-seven such Doctors, among whom are St. Augustine, St. John Chrysostom, and St. Catherine of Siena. On May 2, we remember St. Athanasius, Bishop of Alexandria. He is best known for safeguarding Christological orthodoxy at the time of the First Council of Nicaea in AD 325. He taught, against the heretic Arius, that Jesus is true God, eternally begotten of the Father, not a highly exalted creature as Arius had erroneously taught. The Son is, as we profess in the Creed, consubstantial with the Father. This May, read one of his books. For example, read his On the Incarnation and reflect on the unsurpassable gift we have in Jesus, the Word made flesh. Ask St. Athanasius for his intercession, that you too might hold fast to the truth about Christ and His saving work for us.

There are two additional Doctors of the Church celebrated in May: St. John of Avila and St. Bede the Venerable (May 10 and 25 respectively). Pope Benedict XVI said the following in his 2012 Apostolic Letter declaring St. John of Avila, the early 16th century priest and mystic, a Doctor of the Church: “The love of God, made known in Jesus Christ, is the key to the personal experience and teaching of the Holy Master John of Avila, an ‘evangelical preacher’ constantly grounded in the Sacred Scriptures, passionately concerned for the truth and an outstanding precursor of the new evangelization.” Following the example of St. John, read the Scriptures with faith and devotion. Thereafter, with a heart set ablaze by charity, reach out to others for the sake of bringing them to Christ. At the workplace, be an example of kindness, integrity, and love. At home, allow divine charity to be the unifying principle of your family. St. Bede was a 6th-7th century English monk. His Ecclesiastical History of the English People is itself regarded as important in the history of the English people and in the history of literature. His learning and scholarship should be imitated by us. If you are a student or a teacher, ask for this venerable man’s intercession.

Next, the Church commends the Apostles. More specifically, she holds up Sts. Philip and James on May 3, and St. Matthias on May 14. The first two were part of the original band of twelve disciples chosen by Jesus. In choosing twelve, reminiscent of the twelve Tribes of Israel, Jesus signifies that He is reconstituting Israel. Matthias is chosen to fill the vacancy that Judas’s untimely and shameful death creates. The choosing of Matthias gives us some insight into what it means to be an Apostle. Consider these words from Acts 1:21, “So one of the men who have accompanied us during all the time that the Lord Jesus went in and out among us, beginning from the baptism of John until the day when he was taken up from us—one of these men must become with us a witness to his resurrection.” An Apostle, then, is one who has experienced the public ministry of Jesus, which began with His baptism in the Jordan and ended with His Ascension into heavenly glory. An Apostle (the word means “one who is sent”) is above all a witness to Jesus’s Resurrection, a witness to the fact that Jesus through His paschal mystery has conquered death and secured victory and life for all those who believe in Him. Though the office of Apostle is unique in the life and history of the Church, bear witness in your own way to the truth of the Lord’s Resurrection. Commit yourself to the teaching of the Apostles and their successors (the bishops).

The Blessed Virgin Mary makes a powerful appearance in the month of May as well. On May 13, we celebrate the feast of Our Lady of Fatima. Beginning in 1917, the Virgin appeared to three peasant children (Francisco, Jacinta, and Lucia) in Fatima, Portugal. She gave a powerful message of prayer (especially the holy rosary) and repentance. She warned of grave consequences for the world if the people of the world did not turn to her Immaculate Heart. On this day, pray the holy rosary and ask for Mary’s intercession. On March 25, Pope Francis, along with bishops from around the world, consecrated Russia and Ukraine to the Immaculate Heart of Mary. Take this time to consecrate yourself and your family to it as well, and to the Sacred Heart of her divine Son. Perhaps you can focus on the following prayer, revealed to the three children of Fatima: “O my Jesus, forgive us our sins, save us from the fires of Hell and lead all souls to Heaven, especially those who are in most need of Thy mercy.”

The second Marian feast is that of the Visitation on May 31. This celebrates the visit Mary makes to her relative Elizabeth. The latter had already conceived a child of her own, John (later to be called “the Baptist” or “the Baptizer”). This encounter, which is recorded in Luke 1:39-56, is rich with meaning. First, upon Mary’s greeting, John leaps in Elizabeth’s womb and Elizabeth is filled with the Holy Spirit. Thus causes Elizabeth to exclaim, “Blessed are you among women, and blessed is the fruit of your womb!” If these holy words sound familiar, it is because we pray them in the Hail Mary (a thoroughly scriptural prayer). In response to these words, Mary elects not to magnify or exalt herself, but rather to magnify the Lord. We have here Mary’s famous Magnificat. Take some time to reflect on this mystery of our salvation. Contemplate especially Elizabeth’s words concerning Mary, Mother of God, and Mary’s own words concerning God and His loving salvific plan.

Last but infinitely far from least we have Jesus Himself. On May 29, we celebrate the Solemnity of the Ascension of the Lord. When the Lord gloriously rises to new life, He does not remain forever upon the earth. Instead, He returns to His Father and takes His celestial throne. This scene, as recorded in the Gospels, is a time of sadness for His disciples, for they wonder what will become of them in Jesus’s absence. But Jesus had promised that He would not leave them orphans (Jn. 14:18). Indeed, it is better that He departs, since His ascent means the descent of the Paraclete, the Spirit of Truth (Jn. 14:26). He it is who will empower the disciples boldly to carry out the Lord’s missionary mandate (see Mt. 28:19). Our Lord’s Ascension, as I said before, can tend to get overshadowed by Easter and Pentecost. But let us not forget this marvelous solemnity, on which the Lord consummated His earthly ministry and went to prepare a heavenly place for us.

Our Christian ancestors did much to celebrate this wonderful day. In the early Church, liturgical processions occurred. Eventually, however, perhaps in the eleventh century, quasi-liturgical “pageants” took their place. By the thirteenth century, a fairly general custom was to hoist a statue of the Risen Christ until it disappeared through the church’s ceiling. There are other relatively obscure customs connected with this day as well, including eating a bird to signify Jesus’s “flying” to heaven. This custom was widespread in many parts of Europe in the Middle Ages. In Central Europe, mountain climbing and picnics on high places were part of this blessed day. Very few of these customs remain today. Nevertheless, perhaps some of them may experience a renewal in contemporary Christian homes. A day of reading the Gospel account(s) of the Ascension, feasting on the meat of a bird to symbolize our Lord’s departure, and taking a family hike would be quite fitting. The Church’s maternal care continues unabated in May, so make sure to take full advantage and respond in thanksgiving.

-Read the writings of the Doctors of the Church, such as On the Incarnation by St. Athanasius (May 2, 10, and 25). -Pray for the bishops, successors of the Apostles (May 3 and 14) -Pray the rosary and ask for Mary’s intercession; pray the Fatima Prayer (May 13 and 31) -Reflect on the mystery of Jesus’s Ascension; eat a suitable meal (a bird of some kind) and take a hike with the family (May 26).