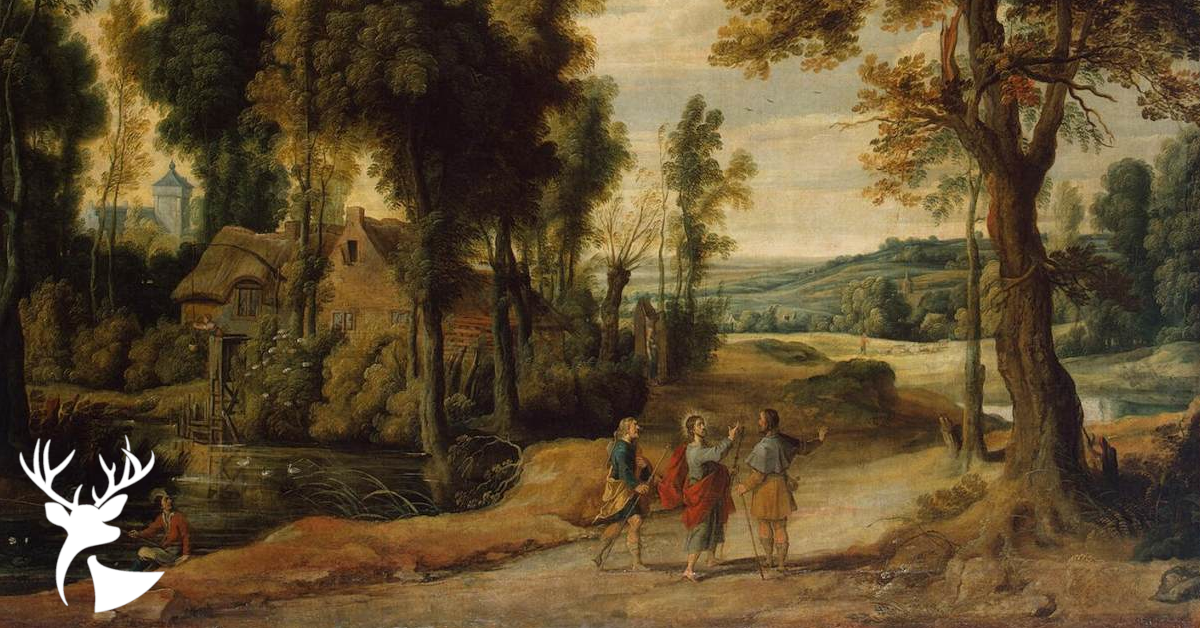 
“When He was at the table with them, he took bread, blessed and broke it, and gave it to them. Then their eyes were opened, and they recognized Him; and He vanished from their sight.”

← Return to Musings
On Easter, it is good to ponder Christ's death and Resurrection. On Emmaus Sunday, we recall that this is also what those two men were doing as they made their commute from Jerusalem back to the town of Emmaus.
Click To Tweet

“When He was at the table with them, he took bread, blessed and broke it, and gave it to them. Then their eyes were opened, and they recognized Him; and He vanished from their sight.”

Share
Tweet
Share
Print
Email
My wife and I are finishing a small cabin on 10-acres that sits on the top of a 1,000 foot hill off of 6 miles of dirt road near Checotah, which means that I have a long commute, but I do not mind. It affords me an opportunity to listen to books and podcasts, some outlaw, red dirt music or Bob Dylan. This past Good Friday, however, I switched from my regular offerings to follow a tradition that I started some 20 years ago. For my journey into Tulsa to attend Stations of the Cross at Holy Family Cathedral, I turned on J.S. Bach’s St. John Passion. The late Fr. Richard John Neuhaus of First Things once wrote that he listened to Bach’s St. Matthew Passion every Good Friday and, when I was a Lutheran pastor, I started to do the same. I would close the door to my office, pour a glass of good scotch, and listen to some of the most beautiful music ever written while meditating on the Passion of Christ. This year I had a long drive so I closed the door to my car and skipped the scotch. Of course, it is a good thing to ponder on Jesus Christ and His passion on Good Friday. On Emmaus Sunday, we recall that this is also what those two men were doing as they made their commute from Jerusalem back to the town of Emmaus (Luke 24:13-35). It was Easter and they were discussing everything that had happened to Jesus Christ on that first Good Friday when a stranger joined them. Luke tells us that this stranger was Jesus, but they were prevented from recognizing Him. They proceeded to tell Him all about Jesus of Nazareth as well as the trial and crucifixion. Then they shared the news offered by the women who failed to find His body at the tomb. It is a rather comical scene. When their commute came to an end, they invited Him to stay with them. Luke records, “When he was at the table with them, he took bread, blessed and broke it, and gave it to them. Then their eyes were opened, and they recognized him; and He vanished from their sight.” (24:30-31) These disciples eyes were opened to recognize the Resurrected Jesus in the Eucharist. Luke could not make it any clearer that the Risen Christ is made known in the Eucharist, the breaking of the bread. These disciples then reflected on their commute with Jesus and reported, “how He had been made known to them in the breaking of the bread.” As we continue our commutes in this life, our own journeys, we would do well to listen to these disciples. When we make our way to Mass, our Lord fulfills His promise to be “with us always, to the end of the age” when we feed on His Body, Blood, Soul and Divinity in the Eucharist. He opens our eyes to His enduring presence among us in this most precious mystery. This should cause us to ponder on His great love for each of us and the entire world and report it to our friends and neighbors that the Risen Jesus makes Himself known in the “breaking of the bread.”

Mason Beecroft is a freelance Catholic writer in the Diocese of Tulsa & Eastern Oklahoma.