Faith of Our Fathers: Bl. Alcuin of York 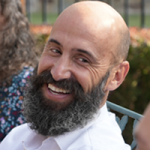 Both Alcuin and Charlemagne seem to suggest that music – and the creation of music in particular – is a unique cure to the disorders of the mind and the emotions and an effective conduit for the cultivation of friendships.
Click To Tweet
Share
Tweet
Share
Print
Email

“The happiest of all your letters has reached me […] it admonished me to mix a sweet melody of versifying amidst the horrible din of clashing weapons and raucous blare of trumpets, since a sweet and gentle musical refrain can mollify the savage impulses of the mind.”